Billboard Charts: For the first time, 4 black women in music occupy the top 2 of the Hot 100.

Despite a tight race for No. 1 on the latest Billboard Hot 100 between Doja Cat’s “Say So,” featuring Nicki Minaj, and Megan Thee Stallion’s “Savage,” featuring Beyoncé, all four women combine for a share of history: This week marks the first in which four black female solo artists occupy the chart’s top two rungs. 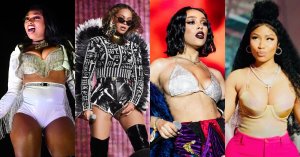 Megan Thee Stallion acknowledged the event on Twitter, saying, “I’m happy to be apart of the history that was made today.”

Before this week, the last time that multiple black women simultaneously infused the top two slots was more than a decade ago, again with Beyoncé in the mix. On the chart dated Jan 3, 2009, her “Single Ladies (Put a Ring on It)” clocked its second of four weeks at No. 1, while former leader T.I.’s “Live Your Life,” featuring Rihanna, ranked at No. 2.

Between that first chart week of 2009 and the latest survey, no black women doubled up in the top two as either lead or featured acts.

As noted above, four or more black women soloists had never secured the top two before this week. If we include groups, however, the last time that as many black women controlled the region was way back in 2001. On the Aug. 8, 2001-dated Hot 100, Destiny’s Child – the then-trio of Beyoncé, Kelly Rowland and Michelle Williams – reigned with “Bootylicious,” a spot above Mariah Carey’s “Loverboy,” featuring male group Cameo.

For exclusively black women (with no other artists credited, a la Cameo), the feat had last occurred just a few weeks earlier, on the May 26, 2001, list, when Janet Jackson’s “All for You” ruled at No. 1 as Destiny’s Child’s “Survivor” resided in the runner-up slot.

Kudos to these queens for hitting the top of the charts!